At this moment exactly two weeks ago I was in a poor city district to the north of Chiclayo called Villa El Sol with the visiting Chalice team of five (three from Canada, including a native Venezuelan, and two from La Paz, Bolivia). All of the Centro Esperanza (CE) promotoras (educators) were present and we formed part of a giant oval of about 60 mothers and one father who have children in the various Proyecto Chiclayo programs in and around Chiclayo. After a successful day of time spent with children and youth participants in CE programs the day before (click here for a glimpse of it), it was time for the Chalice team to get a sense of what parents of program participants see as the successes of the program, things to be improved and hopes for the future.

The community building where Proyecto Chiclayo programs take place has been improved with a new roof, the funds for which came from a Canadian donor. I had only been to this location once a couple months ago and on this second visit, I was blown away upon my arrival by the welcoming atmosphere created in the space with a combination of decorations (made by kids I help teach, the CE team and the mothers themselves) and traditional Peruvian music. The mothers were waiting patiently for the arrival of the Chalice team and their was a sense of joy, excitement and nerves  in the room.

The morning began with four of the five members of the Chalice team adding their hands to the giant banner
created at the beginning of the year by children and parents and the CE team. I added my lime green hand prints to the  banner during my first week in Chiclayo in July. The banner reads:
Chalice-Centro Esperanza
Proyecto Chiclayo
Juntos y comprometidos
por una vida digna para las niñas y niños 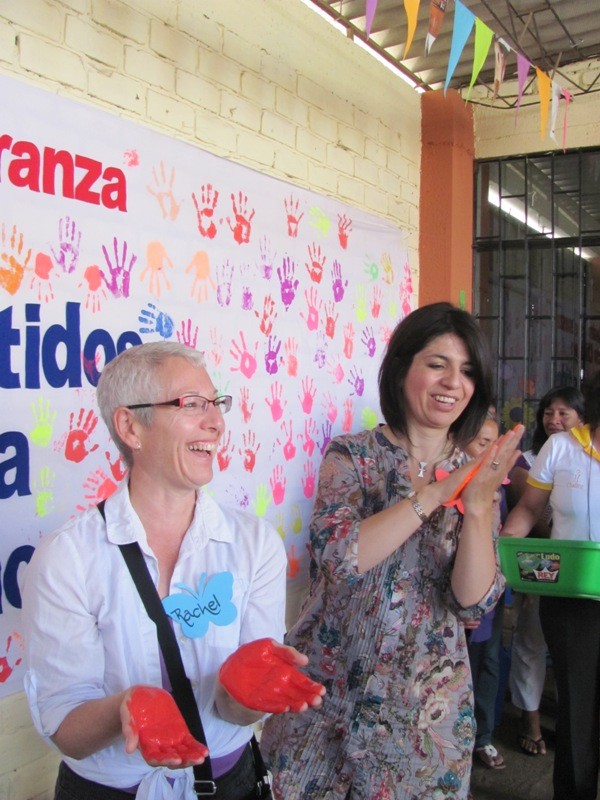 Rachel and Patricia preparing their hands 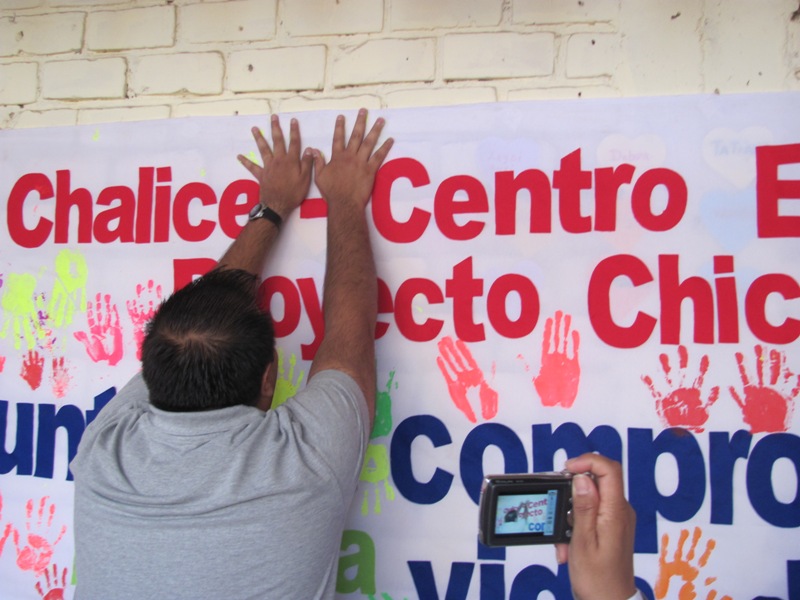 Douglas, a native of Caracas,
who will soon be the director of Project Chiclayo on the Canadian side of things.

Next it was time to sing and what a marvelous song we sang. Called Artesanas de la vida (Artisans of Life), it speaks of women living as friends, in solidarity with others; of the lessons they learn from their errors; of their right to demand that their rights be respected; of their search for justice, hope and equality.

There are not words to describe what followed, when the women were given the chance to share the experiences they have had as part of Proyecto Chiclayo. The gratitude expressed by these women, who have themselves experienced more that I will ever be able to imagine, was incredible. Some only finished the first few years of elementary school and are now completing their studies thanks to Chalice; others have overcome situations of domestic violence by choosing to divorce oppressive husbands thanks to support from other women in the program. Some have learned how to eliminate violence measures from their parenting techniques thanks to workshops offered by the programs; others have learned new skills which give them the opportunity to earn a small income for their families; others have come to realize the importance of education for their childrens’ futures. The list went on…

As each women shared her story or those of her children, she placed a flower or butterfly
on the tree in the centre of the oval… 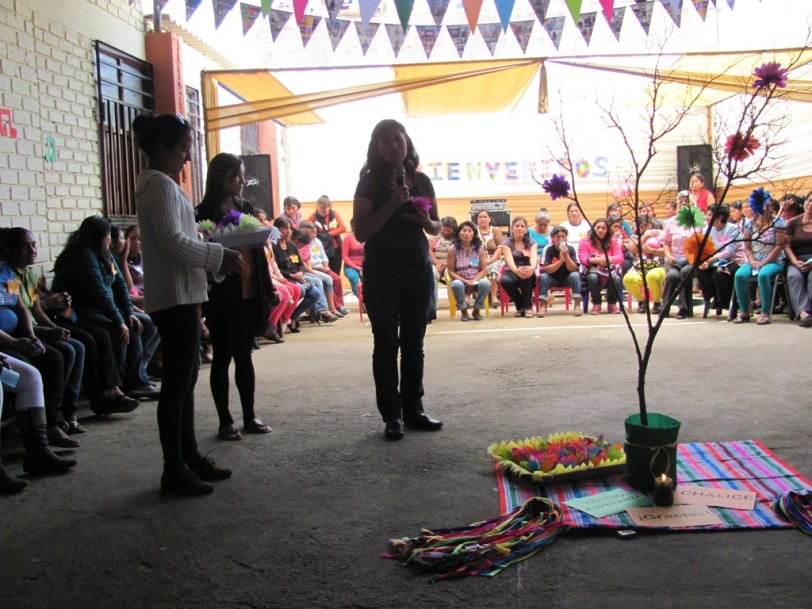 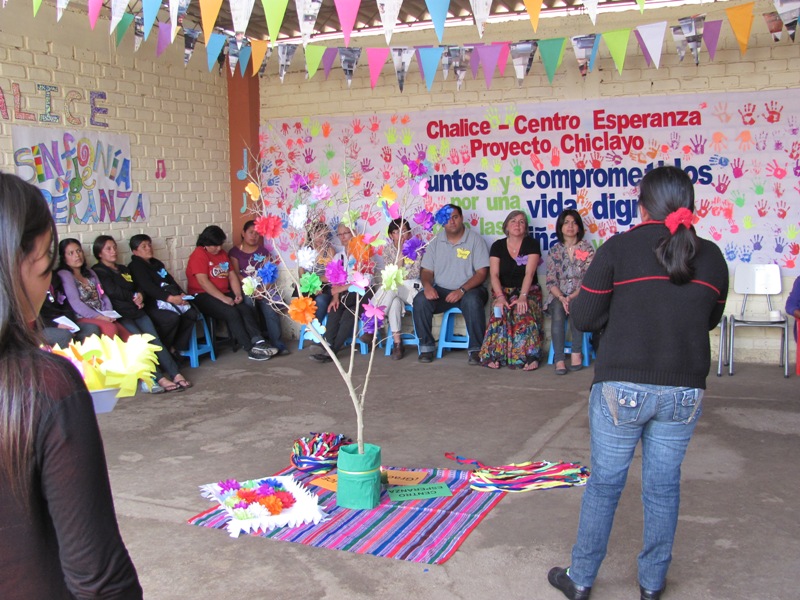 The only father present at the meeting was convinced by his wife to share his thoughts on the program; while his words were brief, we all appreciated his courage to speak in front of everyone, as one of only two male meeting participants.

Next it was time for each of the members of the Chalice team to share their words on what Proyecto Chiclayo means to them. MaryAnne will be passing her responsibilities onto Douglas and it was clear that her work and friendship over the years has been appreciated by all in the program. Douglas’ touching speech was more than well received by all present and I think that as a Latino man with a vision of equality for all and youthful ideas, he will be an excellent director of the project on the Canadian end and a great example for the parents of Projecto Chiclayo  participants.

MaryAnne sharing words of appreciation, wisdom and a sincere hasta luego (not good bye, but until next time),
as I translate for Rachel.

The inspiring morning concluded with an activity to unite us all together. We ‘wove’ a network constructed by each and every participant by tying together coloured ribbons and walking together in a circle around the tree of hope we had finished creating, while singing of course. The positive, hopeful energy created a few minutes of magic… 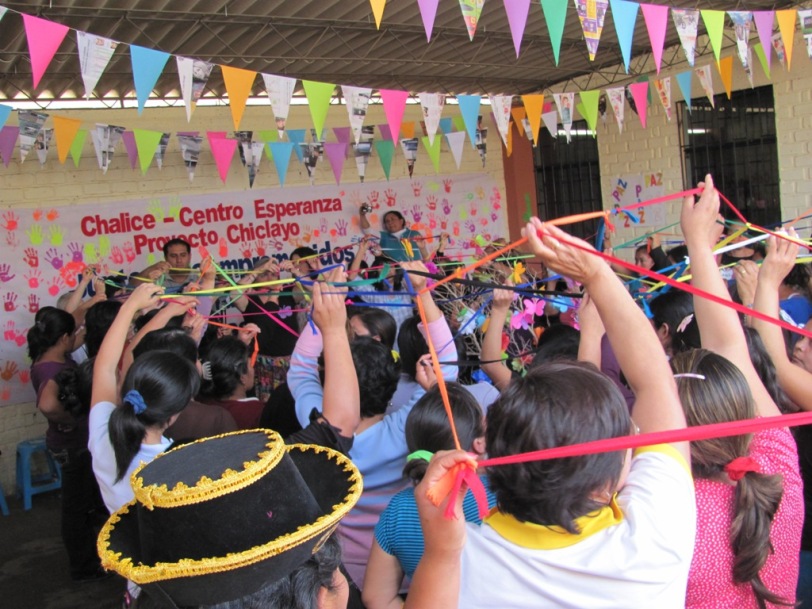 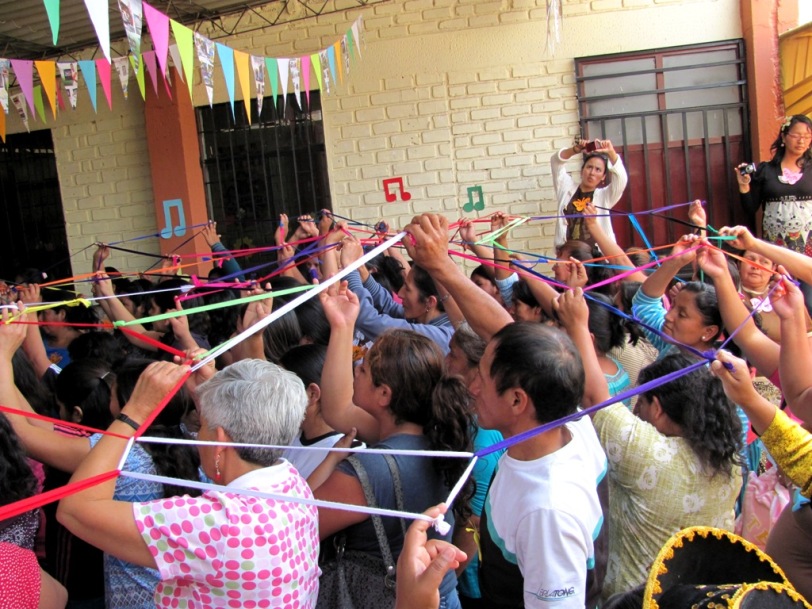 And who could forget the pictures… 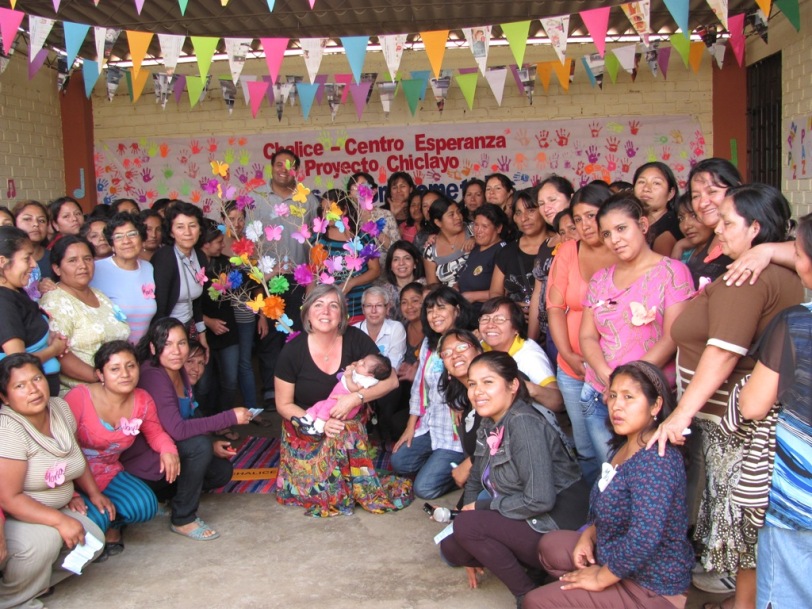 The Chalice visitors with Gladis, the local director of Proyecto Chiclayo 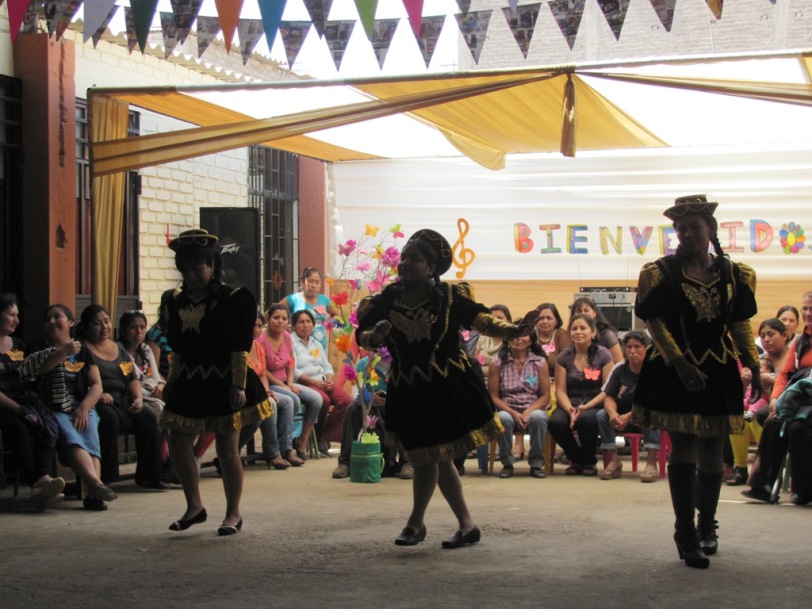 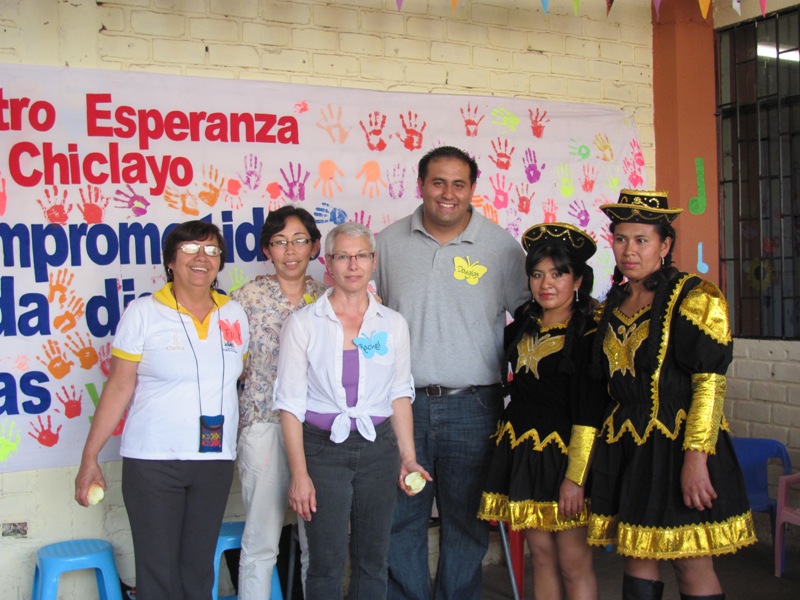 Filled with hugs and kisses of love and friendship, this unforgettable morning continued for the Chalice team and a few CE team members with a surprise invitation to a delicious home-prepared lunch at the home of one of the mothers from Villa El Sol. This gesture of appreciation reminds me of what I love about the people we work with; although they are poor economically, they will go out of their way to demonstrate welcoming gestures for their guests.

This meal gave us time to digest both our thoughts on the amazing experience we had just shared and a tasty arroz con pollo (rice with chicken), a typical meal in Peru. We were then accompanied along the unpaved streets of the neighbourhood under a scorching sun, together with several mothers, to the main road that heads back into Chiclayo and sent off with final hugs and kisses. We could have not dreamed of a better visit.